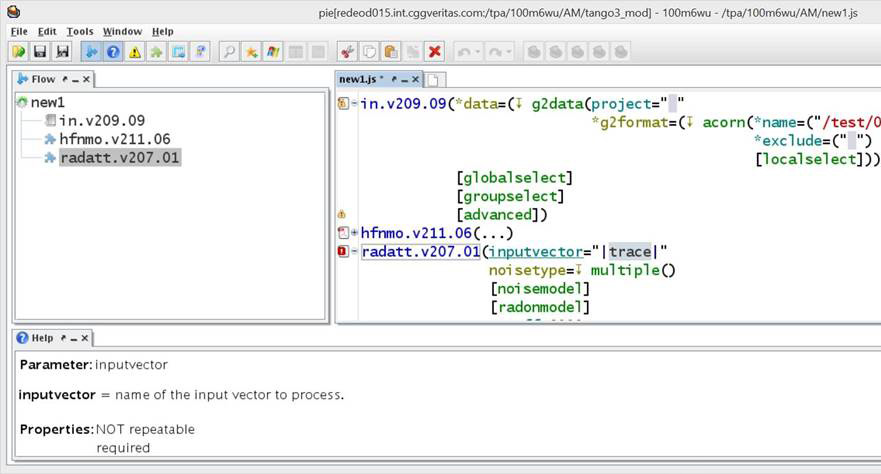 The new batch jobs coding interface is an intuitive environment with step-by-step instructions and built-in help for quick parameter checking. In a single window, you can select the names of input data sets and check for the availability of output data. It goes well with the new WEB job manager.

Thanks to the encoding area with step-by-step nstructions and explicit default parameters set up, jobs can be generated easily and quickly.

Managing production operations based on WEB

Geophysicists now can submit multiple jobs at a time, as well as quickly select and resubmit any jobs. Users can assign the required number of computing cores with a simple operation.

The job manager based on a web-technology offers a simplified cross-platform instrument for job submission and a faster browser for data being processed.

Processing and quality control of large amounts of data

The new software architecture is optimized for working with data with high fold cover and density of observations in thousands of square kilometers and billions of traces. All available tools have been developed based on feedback from CGG's processing specialists worldwide, and are regularly used in production. 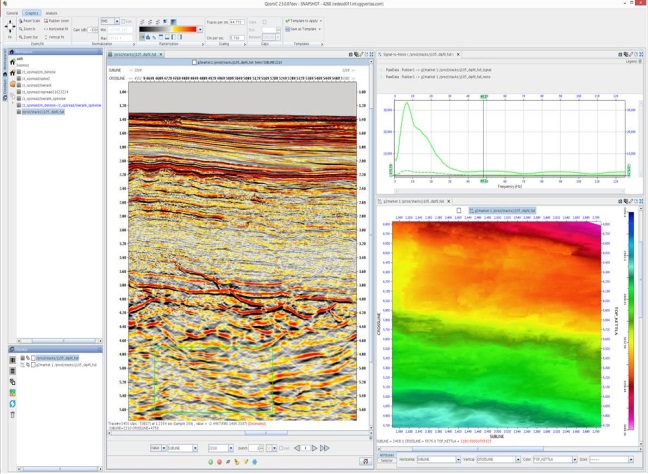 Next-generation interactive tools provide a single interface for a wide range of specialized applications. They include: 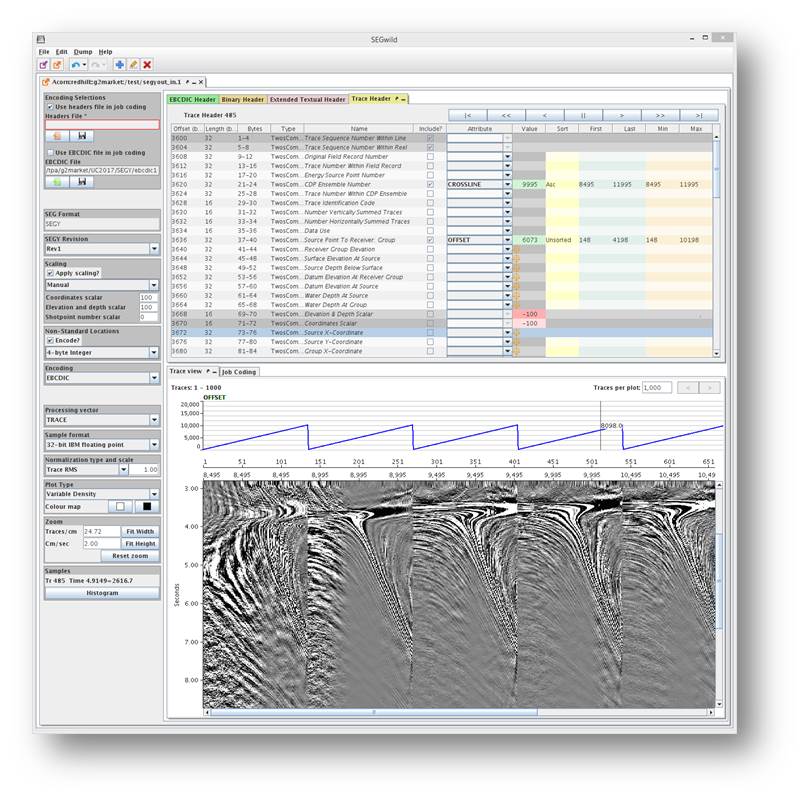 Retrieving and preserving the attributes of seismic traces can be a complex process that requires a lot of time. The new application decodes seismic formats and offers a built-in window for viewing results.

At the end of processing, the SEGY encoding help function reduces the time needed for creation and quality control of the SEGY tape.

Supports all latest formats including SEGD version 3.0 and SEGY version 2.0

First break picking is clear and simple: mark the picking direction on the gathers -> set parameters -> start automatic picking. Multiple picking results can be displayed all together to facilitate the selection of the best result. As a subsequent quality control, you can align the seismograms using the picking results.

In addition, it is possible to derive a simple near surface model for further work with velocity-depth models.

Working with near surface statics

The platform for working with the near surface is based on the following components:

Input (above) and output (below) tomographic near surface models 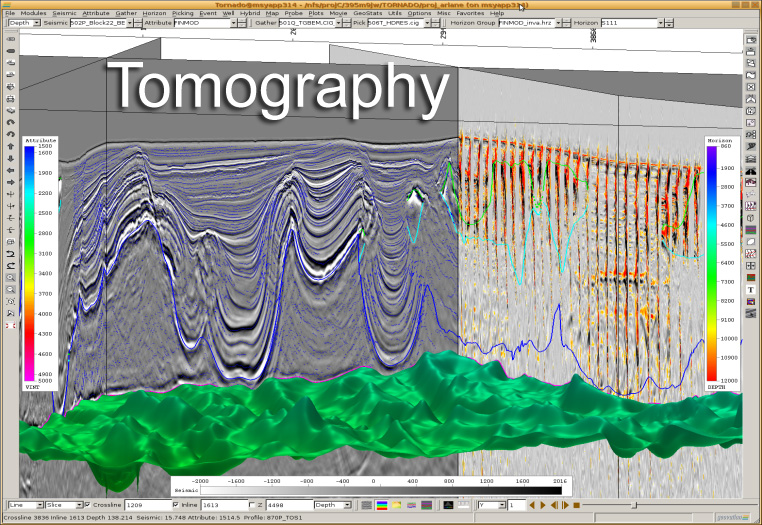 Presented tools are constantly updated and improved; currently, tomographic model updating, defining the aperture, geostatistical analysis and filtering, as well as tools for picking velocities and working with horizons are available. 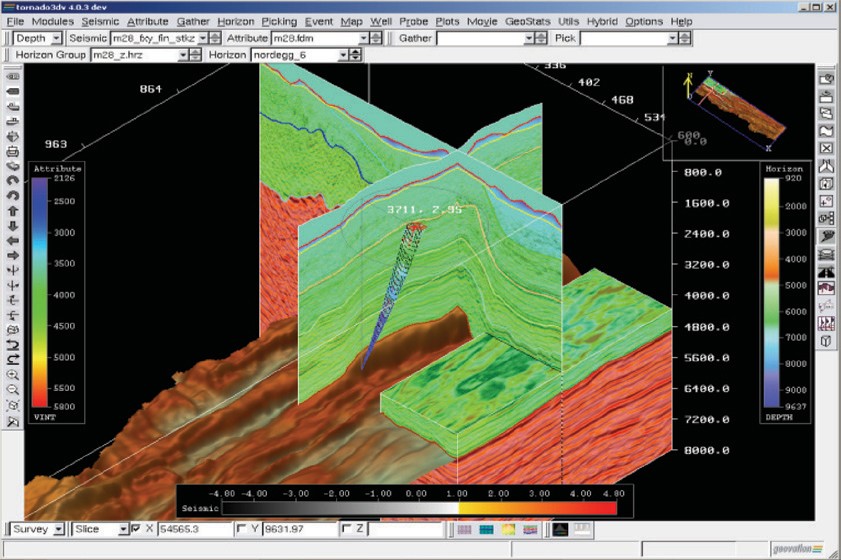 Visualization tools allow you to perform 3D quality control of very large data arrays, as well as easily and quickly determine the optimal model. In order to control the quality of signal processing you can calculate and display differences in 3D arrays etc.

An example of a window which shows a seismic volume with velocities applied to straight and curved layers and sections, as well as the surface of horizons and ray paths.

Deghosting provides a more accurate and distinct signal and, thus, a more informative image. Ghost waves can be removed both from the source side and from the receiver side, which leads to an improvement in the frequency and a clearer definition of onsets. Marine seismic surveys with a towed streamer with a variable depth and using BroadSeis technology do not allow for dips in the amplitude spectrum which are possible when conducting studies using standard streamers, and use the full frequency range. Subsequent inversion results benefit from the use of data without ghost waves.

A full stack with a standard signature application (above) and with deghosting (below). The frequency spectrum of the image with deghosting is more informative, especially in the low-frequency area. This allows you to more accurately divide the horizons due to the clear display of the signal.

Using the technique of sparse dipole tau-P conversion allows you to perform a full conversion without losses. This technique can be used to remove seismic interference, attenuate noise, and apply receiver motion corrections. 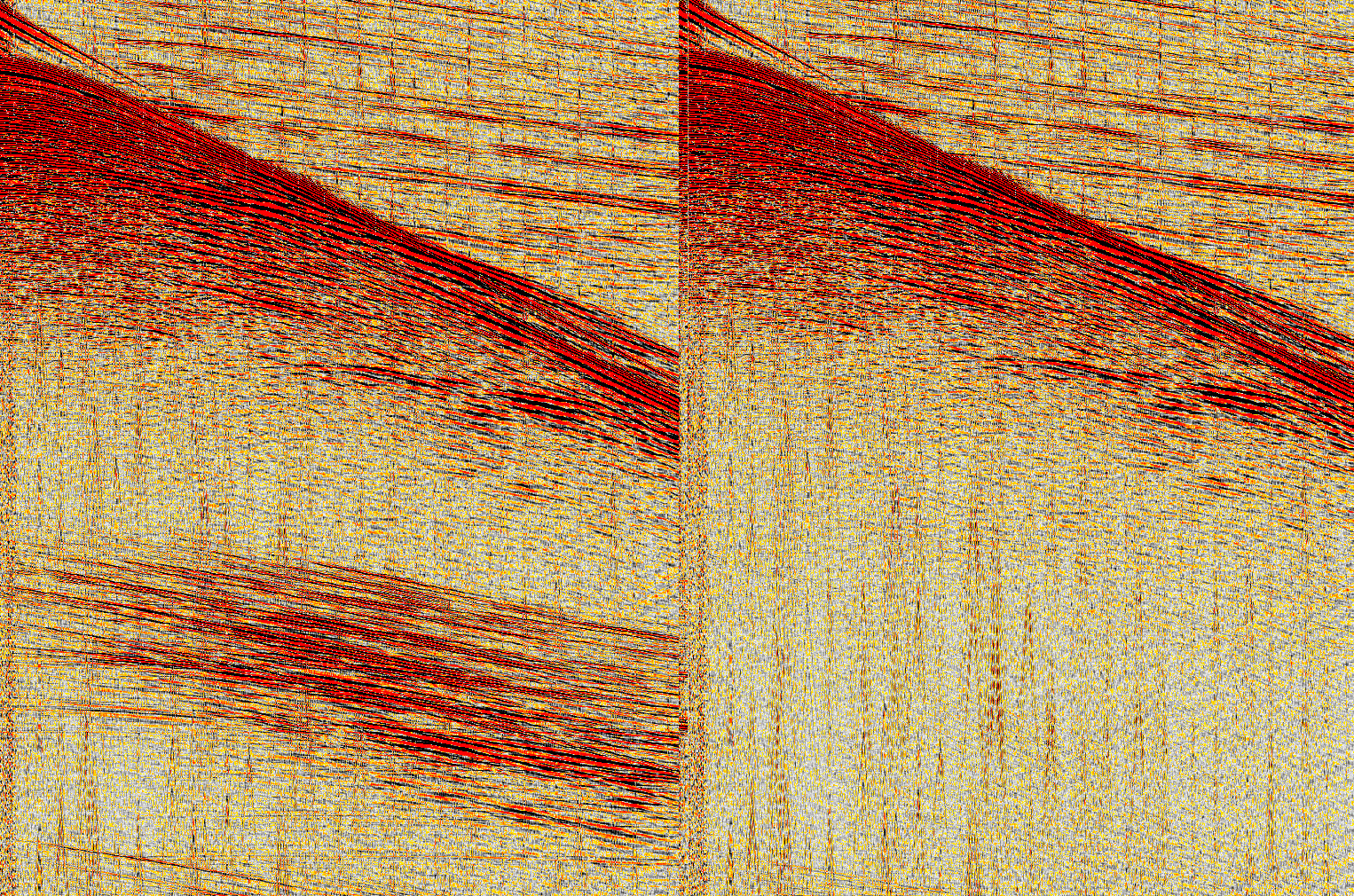 Removing seismic interference does not require prior information about the location and speed of the vessel causing the interference. The removal process is effective over the entire frequency range.

Example of source before and after removal of seismic interference

The process of sparse dipole noise attenuation gives stable results in the field of source or receiver, and it also works effectively with apparent dipping events, such as swell, or impact noise.

Near-field hydrophone, before (a) and after (b) noise attenuation

The new version of Geovation includes an advanced tool for attenuating surface-related multiples and dispersive interference.

The created noise model is automatically adapted and subtracted from the data in one step without storing the model on disk or in memory.

Before and after surface-related multiples attenuation

Surface-consistent processing is now done in one step. Replaces old module sequences and works on the whole survey at once.

This approach is iterative, it can be repeated to achieve high resolution.

The approach with the greatest possible surface consistency remains the best method of residual statics/trim-statics. A stochastic solution is used using the global optimization method for the entire survey in one step. This method is applicable to land surveys; shooting with ocean bottom cables, nodal sensors; and in shallow water. Geovation offers a number of modeling algorithms for various multiples, such as attenuation of surface-related and interbed multiples.

In addition to applying SRME to marine data (using convolution), a new technology has been developed for working with land seismic acquisistion data, which allows accurate multiple attenuation in land data.

In addition to the standard adaptive least squares method subtraction, we also offer subtraction in the curvelet domain to eliminate multiple waves or attenuate noise.

Before and after subtraction in the curvelet domain CGG offers a new cascade noise attenuation module using various algorithms in a single pass with one Fourier transform. This module is a key module for attenuating noise in the areas of cross-spreads, SP or RP and offsets/COV.

It includes Cadzow algorithm, the coherent interference attenuation algorithm, and many other algorithms.

The implemented technology that performs 5D regularization can be used to merge surveys, harmonize folds and regularize azimuths. It provides a “natural” compaction of the input lines of SP and RP for improved migration based on SP. It also offers harmonization of bins/folds/offsets/azimuths. 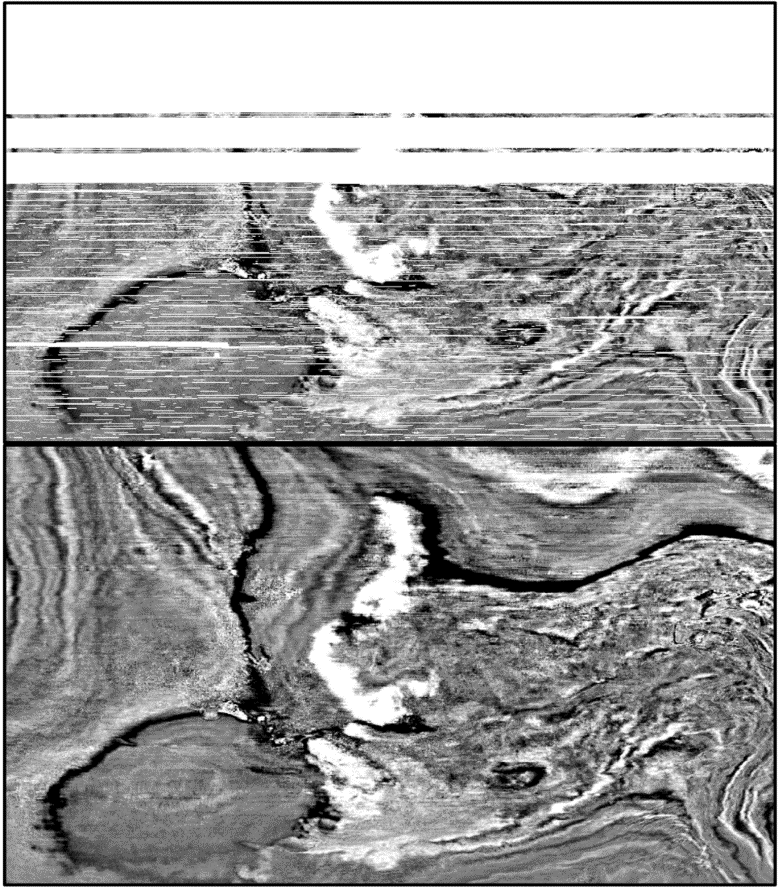 When processing marine narrow-azimuth survey data, 4.5D regularization is used. In this case, the following directions are taken into account: inline, crossline, time, offline, and the azimuth is interpolated taking into account the direction of shooting.

In the case of wide-azimuthal data from land or marine surveys, regularization is performed on arrays of total offsets to maximize the use of the entire range of azimuths obtained.

Near-offset section before (above) and after (below) 4.5D regularization. The empty area in the input data corresponds to the area with other shooting parameters.

CGG's patented nonlinear slope tomography technique is a key element in building a velocity model. This method allows you to efficiently convert from time to depth domain as and when necessary, due to the uniformity of format and graphs in both domains. 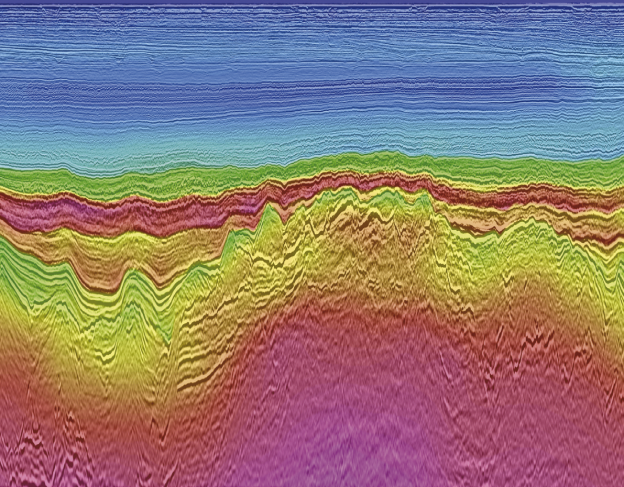 Nonlinear slope tomography in the depth domain gives an opportunity to update layers in any order, any at a time, as well as to perform high resolution tomography in order to obtain even more accurate velocity field of PSDM depth migration in TTI medium.

An example of a PSDM section (North Sea) with velocities applied Velocity models applied to the corresponding sections: before (a) and after (b) dip-constrained tomography.

In addition to the velocity, delta and epsilon parameters, Q-tomography can also take into account absorption in a complex inversion. This method uses additional Q calculation information from seismograms. 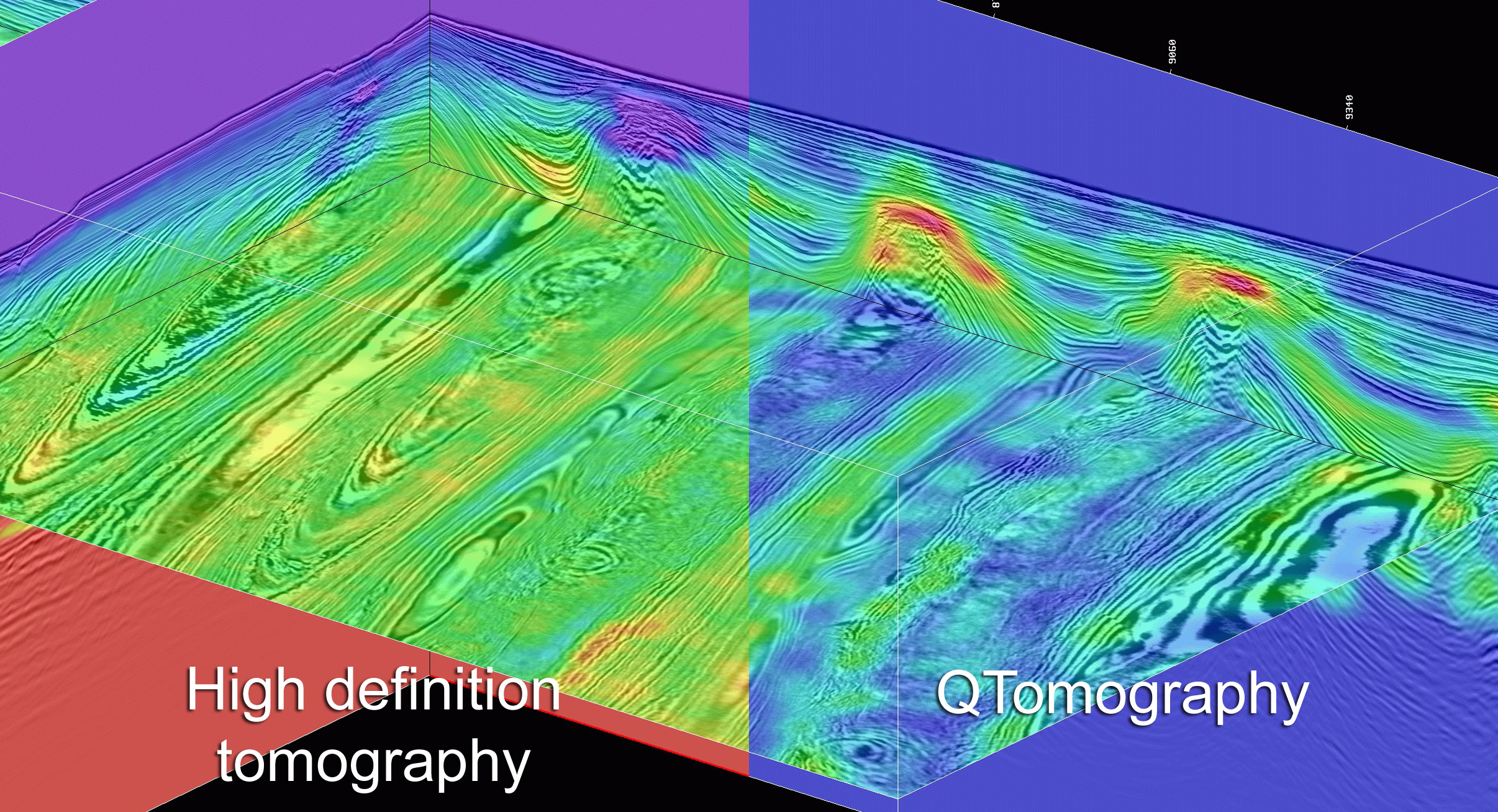 The developed algorithms include standard Kirchhoff migration in the time and depth domains. They are excellently and effectively implemented in the process of tomographic refinement.

The new implementation of time migration works much faster than the algorithms of the previous generation. Depth migration allows Q-migration.

The method is designed to achieve an improved signal-to-noise ratio and display steep dips in difficult geological conditions. This technique is a powerful and versatile tool that allows you to perform a deeper structural interpretation used to accelerate the construction of a velocity model in complex areas, such as in the subsalt section of a slice. The ability of this tool to display such structures as overthrusts and cavities in the bedding rock makes it extremely valuable in terms of accurate mapping of complex geological structures. This, in addition, gives excellent results when working with typical land datasets containing a lot of interference.

Also, an option of multiple waves attenuation was added to the technique, which allows recognition of internal multiple waves. This option has particularly proved its worth in areas such as the North Sea, where significant multiple generators are observed.

The method calculates the wave propagation in the downward and upward directions through the entire model of a geological environment, visually characterizing the refracted waves and other complex ray paths. In many cases, the ability to use such complex types of waves allows you to display parts of the geological environment which in other cases have poor direct illumination in the section. 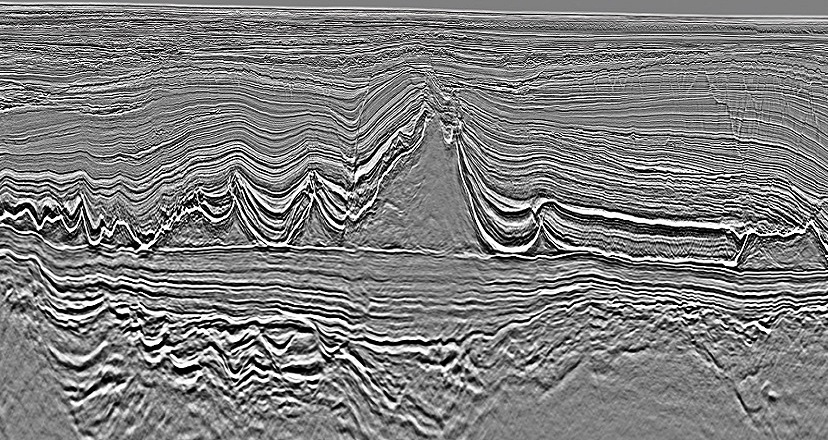 The Geovation 2 software developed by CGG has moved to a new platform to solve complex problems when working with increasing volumes of seismic data.

The new version of Geovation 2 includes tools for operational processing of dense, wide-azimuth data with high fold cover, both in terms of computation and data quality control. The code for most modern algorithms has been optimized to speed up the production cycle.